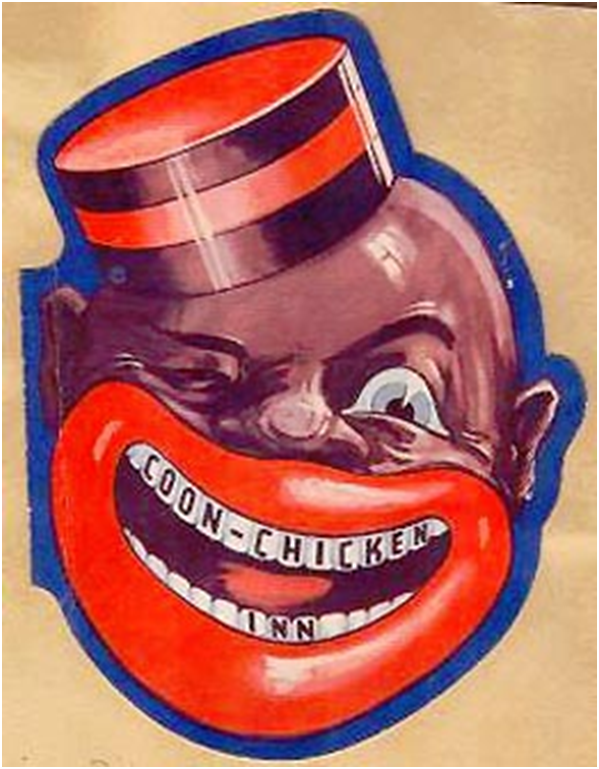 The Coon Chicken Inn’s famous logo was of a “Coon,” or a racist caricature of an African American male rooted in nineteenth century minstrel theater and early twentieth century advertising. The restaurant’s “Coon” logo wore a porter’s uniform. The face was complete with a winking left eye and enlarged red lips forever gaping to expose the words “Coon Chicken Inn” etched on the rows of shining white teeth.

Though Lake City remained outside of the Seattle city limits until 1954, the Old Bothell Highway had played a role in setting Seattle’s racial landscape since the early twentieth century. The area gained township status in 1949 after a flood of families flocked to the suburbs in the post-World War II years. Lake City’s development was always dependent on the automobile; in 1911, King County improved the Bothell Highway, an old logging road, by paving it with asphalt-based Warrenite. Located in an unincorporated area of King County easily accessible by automobile, the Old Bothell Highway proved to be a prime location for roadside restaurants. As early as 1919, Southern and minstrel-themed fried chicken restaurants were attracting Seattleites who, according to Hattie Graham Horrocks’ guide to Seattle restaurants, “wished to drive out-of-town for the occasional dinner.” My Southern Inn, renowned for “frying chicken in the window in plain sight of passersby,” became one of the first, soon followed in 1921 by Bob’s Place and in 1923 by Mammy’s Shack.

Though many roadside restaurant façades were utilitarian, a few, like the Coon Chicken Inn, embraced a more fanciful, programmatic architectural design. Like the landmark Brown Derby restaurant in Los Angeles or the Teapot Dome Service Station in Zillah, Washington, programmatic, or novelty, architecture, aimed to attract the attention of passersby with its unconventional structures. 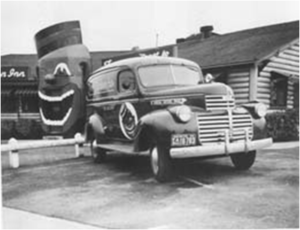 Once he had situated it on the Old Bothell Highway, Lester Graham vigorously promoted the new restaurant. On August 31, 1930, an advertisement for the newly opened Coon Chicken Inn, disguised as a news story, took up almost a full page in The Seattle Times. Under the heading “Coon Chicken Inn Opened in Seattle,” the page featured the short columns, “Coon Chicken? Ask Anyone Who Came From South,” “Highway Resort is One of Huge National Chain,” “Inn is Built From Local Materials,” “Utah Folk are Champions of Fried Chicken,” “Telephone Will Bring Chicken to Your Home,” and “Parking Space is Provided at Inn for 500 Autos.” The page also included a large display advertisement for the restaurant, complete with this description:

“The best fried chicken you ever tasted! That’s a mighty strong statement, but you’ll agree after visiting Seattle’s newest, most unique eating place that it’s a mighty true one. Coon Chicken Inn brings to Seattle and the Northwest a nationally-famous method of cookery, and provides a novel, pleasing restaurant at which you’ll enjoy eating. Good food served in a cheerful atmosphere! A service that will fit in with your every plan — party, after-theatre affair, or the wish for a splendid meal! Throughout America our splendid foods have pleased the most discriminating palates. Coon Chicken Inn is not ‘just another restaurant’ — it is an innovation providing a pleasurable change from the ordinary café — a new eating place whose cuisine is considered in a class by itself, head and shoulders above the average.” 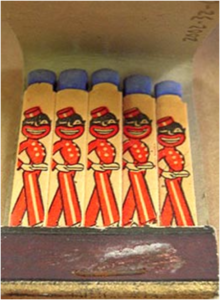 Though The Seattle Times advertisement and articles made no mention of African Americans or the coon stereotype, the African American community in Seattle took issue with this blatant display of racial hostility. In 1930, the Seattle branch of the National Association for the Advancement for Colored People (NAACP) and Seattle’s African American newspaper, the Northwest Enterprise, protested the opening of the local Coon Chicken Inn by threatening Graham with a lawsuit for libel and defamation of race. In response, Graham agreed to change the style of advertising by removing the word “Coon” from the restaurant’s delivery car, repainting the “Coon head” entrance to the restaurant, and canceling an order of 1,000 automobile tire covers. These small concessions, however, were not enough to erase the image of the caricature from Seattle. Graham violated his agreement with the NAACP but managed to evade the lawsuit by changing the color of the “Coon” logo from black- or brown-skinned to blue.

In an oral history interview recorded by Ester Mumford in 1975, Joseph Staton, an employee of the Northwest Enterprise, related how some members of the African American community took individual action against the Coon Chicken Inn. Staton and four friends created what Staton referred to as a “contest” — each friend put in 50 cents apiece and whoever cut the most “Coon” faces out of the spare tire covers after 30 days would win the pot. Eventually, Staton was caught participating in this prank and was arrested, booked, and fined $3. 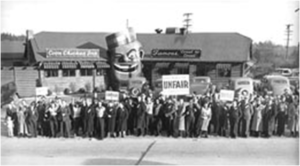 In March 1937 the Bartenders, Cooks, Waiters, and Waitresses Union (BCWW) and the Musicians Union orchestrated a joint labor protest against the Coon Chicken Inn. The unions picketed the restaurant for a week, holding signs that read “Unfair” while protesting the restaurant’s treatment of organized labor and demanding that the Coon Chicken Inn be completely unionized.

The labor action was successful. On March 18, E. B. Fish, the labor counsel for the Seattle Chamber of Commerce labor relations department; Jack Weinberger, the international representative of the BCWW; and Lester Graham signed the standard agreement of the unions.

The Coon Chicken Inn persisted on the Old Bothell Highway until late 1949, when Lester Graham removed the “Coon head” from public view and closed the restaurant’s doors. But neither Graham nor the Coon Chicken Inn disappeared from Seattle completely. In December 1949, the Lake City Citizen featured an advertisement for the newly opened G.I. Joe’s New Country Store, giving its location as the old Coon Chicken Inn building.